Mr. Goenka is a very successful businessman who has risen to the top by his vision, sheer dynamism and superb organization skills.

He was appointed as the Honorary Consul of the Republic of Kenya in Mumbai by the Govt. of Kenya. It is a privilege to serve both Kenya and India and promote bilateral trade relations between the two countries. The Govt of Kenya appointed Mr. R.A. Goenka as the First Honorary Consul for the Republic of Kenya. Mr. Goenka has conducted several promotional activities in the fields of Trade, Tourism and Capital Investments for the Kenyan Government. Also he has worked closely with the Indo-African Chamber of Commerce to promote both Trade & Investments. Several high level meetings between Kenyan Ministers and Indian businessmen have been organized to promote business between the two countries. A number of agreements have been concluded fostering closer economic & cultural ties between the two countries. 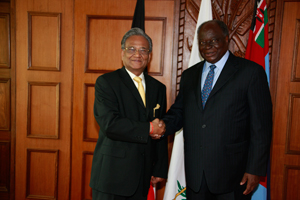 Mr. R. A. Goenka
with
Hon. Mwai Kibaki,
Ex-President and Commander-in-chief of Armed Forces of Republic of Kenya 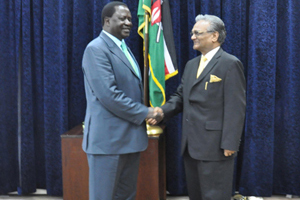 He is also the Executive Committee Member of Indo-African Chambers of Commerce, and a fellow member of prestigious organizations like Indian Merchant Chambers and Federation of Indian Export Organization. He is also running Charity Organizations working on subjects of Educating Children and issues related to the healthcare of underprivileged Children.

He has founded Laxmi Charitable Trust and Goenka Mateshwari Charitable Trust. These Charitable Organizations are dedicated to improve public education for human and social development. The trusts also work in the field of arranging medical aid to children, the disabled people and the aged. With a view of giving back to the society, Mr. Ramavtar Goenka along with his brothers started a School in Pilani, Rajasthan where more than 1000 underprivileged students study at any given point of time.